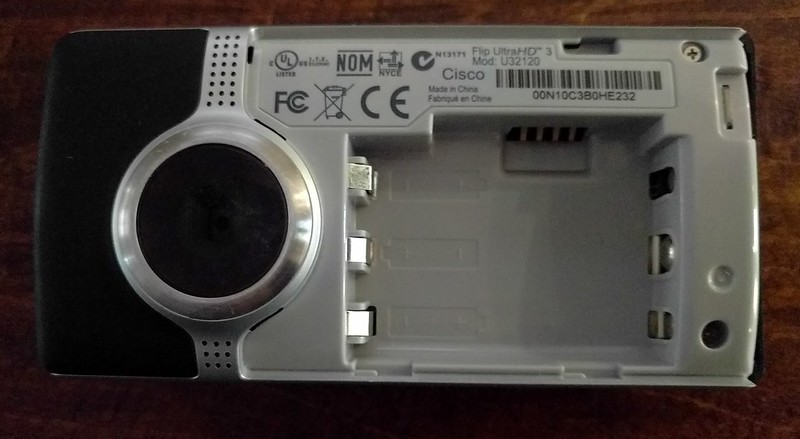 It seems like small thing, but it’s an engineering detail I’ve always had a lot of respect for.
That picture is of a Flip video camera with the lid off, a product from about nine years ago. It was a decent little video camera at a time that phones weren’t up to it, storing a bit over an hour of 720p video with decent sound. The company that made them, Pure Digital Technologies, was bought by Cisco in 2009 for about $590M and shut down less than two years later. Their last product – that ultimately never shipped – could stream video live to the Web, something we wouldn’t really see from a pocket-sized device until Periscope and (now-dead) Meerkat took a run at it five years later.
The thing I wanted to call attention to, though, is the shape of that case. The Flip shipped with a custom rectangular battery that had the usual extra charging smarts in it and you could charge off USB, like all civilized hardware that size. But it also gave you the option of putting in three absolutely standard, available-everywhere AAA batteries instead, after that exotic square thing finally died.
You only get to run the camera about two-thirds as long, sure. But long after they’ve stopped making those custom batteries or supporting the device itself, the fact of the matter is: you can still run it at all. It may not be the best thing around, but it’s also not in a landfill. It still does everything it said it would; my kids can make movies with it and they’re good fun. It didn’t suddenly become junk just because the people who made it aren’t around anymore.
I’ve often wondered what those product meetings looked like at Pure Digital. Who pushed for that one extra feature that might give their product a few extra years of life, when so many market forces were and are pushing against it. What did they see, that convinced them to hold the line on a feature that few people would ever use, or even notice? You see it less and less every day, in software and hardware alike – the idea that longevity matters, that maybe repair is better than replace.
If you’re still out there, whoever made this what it was: I noticed. I think it matters, and I’m grateful. I hope that’s worth something.