Every now and then, my brain clamps on to obscure trivia like this. It takes so much time. “Because the paper beds of banknote presses in 1860 were 14.5 inches by 16.5 inches, a movie industry cartel set a standard for theater projectors based on silent film, and two kilobytes is two kilobytes” is as far back as I have been able to push this, but let’s get started.

In August of 1861, by order of the U.S. Congress and in order to fund the Union’s ongoing war efforts against the treasonous secessionists of the South, the American Banknote Company started printing what were then called “Demand Notes”, but soon widely known as “greenbacks”.

It’s difficult to research anything about the early days of American currency on Wikipedia these days; that space has been thoroughly colonized by the goldbug/sovcit cranks. You wouldn’t notice it from a casual examination, which is of course the plan; that festering rathole is tucked away down in the references, where articles will fold a seemingly innocuous line somewhere into the middle, tagged with an exceptionally dodgy reference. You’ll learn that “the shift from demand notes to treasury notes meant they could no longer be redeemed for gold coins[1]” – which is strictly true! – but if you chase down that footnote you wind up somewhere with a name like “Lincoln’s Treason – Fiat Currency, Maritime Law And The U.S. Treasury’s Conspiracy To Enslave America”, which I promise I am only barely exaggerating about.

It’s not entirely clear if this is a deliberate exercise in coordinated crank-wank or just years of accumulated flotsam from the usual debate-club dead-enders hanging off the starboard side of the Overton window. There’s plenty of idiots out there that aren’t quite useful enough to work the k-cups at the Heritage Institute, and I guess they’re doing something with their time, but the whole thing has a certain sinister elegance to it that the Randroid crowd can’t usually muster. I’ve got my doubts either way, and I honestly don’t care to dive deep enough into that sewer to settle them. Either way, it’s always good to be reminded that the goldbug/randroid/sovcit crank spectrum shares a common ideological klancestor.

Mercifully that is not what I’m here for. I am here because these first Demand Notes, and the Treasury Notes that came afterwards, were – on average, these were imprecise times – 7-3/8” wide by 3-1/4” tall.

I haven’t been able to precisely answer the “why” of that – I believe, but do not know, that that this is because of the size of the specific dimensions of the presses they were printed on. Despite my best efforts I haven’t been able to find the exact model and specifications of that device. I’ve asked the U.S. Congressional Research Service for some help with this, but between them and the Bureau of Engraving and Printing, we haven’t been able to pin it down. From my last correspondence with them:

Unfortunately, we don’t have any materials in the collection identifying the specific presses and their dimension for early currency production. The best we can say is that the presses used to print currency in the 1860s varied in size and model. These presses went by a number of names, including hand presses, flat-bed presses, and spider presses. They also were capable of printing sheets of paper in various sizes. However, the standard size for printing securities and banknotes appears to have been 14.5 inches by 16.5 inches. We hope this bit of information helps.

The answer to that question starts to matter about twenty years later on the heels of the 1880 American Census. Mandated to be performed once a decade, the United States population had grown some 30% since the previous census, and even with enormous effort the final tabulations weren’t finished until 1888, an unacceptable delay.

One of the 1880 Census’ early employees was a man named Herman Hollerith, a recent graduate of the Columbia School of Mines who’d been invited to join the Census efforts early on by one of his professors. The Census was one of the most important social and professional networking exercises of the day, and Hollerith correctly jumped at the opportunity:

The absence of a permanent institution meant the network of individuals with professional census expertise scattered widely after each census. The invitation offered a young graduate the possibility to get acquainted with various members of the network, which was soon to be dispersed across the country.

As an aside, that invitation letter is one of the most important early documents in the history of computing for lots of reasons, including this one: 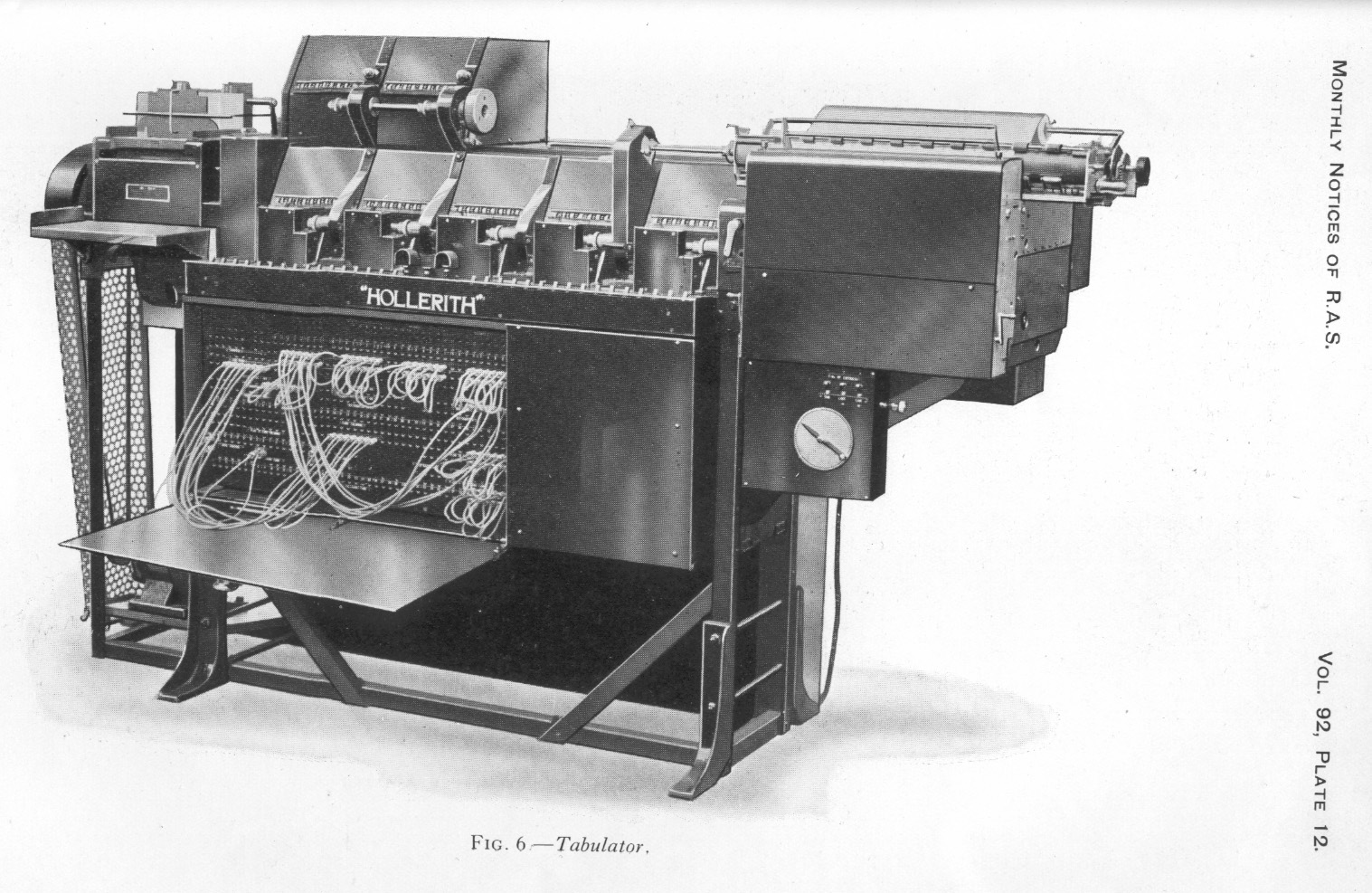 The machine in that picture was the third generation of the “Hollerith Tabulator”, notable for the replaceable plugboard that made it reprogrammable. I need to find some time to dig further into this, but that might be the first multipurpose, if not “general purpose” as we’ve come to understand it, electronic computation device. This is another piece of formative tech that emerged from this era, one that led to directly to the removable panels (and ultimately the general componentization) of later computing hardware.
Well before the model 3, though, was the original 1890 Hollerith Census Tabulator that relied on punchcards much like this one.

Hollerith took the inspiration for those punchcards from the “punch photographs” used by some railways at the time to make sure that tickets belonged to the passengers holding them. You can see a description of one patent for them here dating to 1888, but Hollerith relates the story from a few years earlier:

One thing that helped me along in this matter was that some time before I was traveling in the west and I had a ticket with what I think was called a punch photograph. When the ticket was first presented to a conductor he punched out a description of the individual, as light hair, dark eyes, large nose etc. So you see I only made a punch photograph of each person.

Tangentially: this is the birth of computational biometrics. And as you can see from this extract from The Railway News (Vol. XLVIII, No. 1234 , published Aug. 27, 1887) people have been concerned about harassment because of unfair assessment by the authorities from day one: 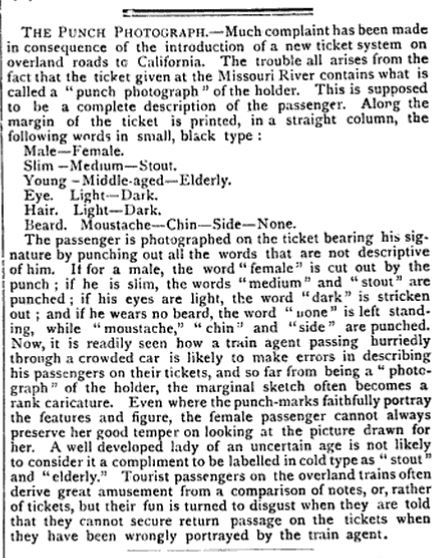 But if you ever wondered why just about every terminal in the world is eighty characters wide and twenty-five characters tall, there you go.