One of my favourite anecdotes in Kernighan’s “Unix, A History And A Memoir” is the observation that the reason early Unix commands are so often truncated – rm, mv, ls, and so on – was that the keyboards of the day were so terrible that they hurt to type on for any length of time.

I wish more people thought about keyboards. This is the primary interface to these devices we spend so much of our time on, and it baffles me that people just stick with whatever ten dollar keyboard came in the box. It makes as much sense to me a runner buying one-size-fits-all shoes.

There are a lot of people who do think about keyboards, of course, but even so what I’m aiming for isn’t part of that conversation, and often feels like lonely work. Most of the mechanical keyboard fetishists that I can find are in it for the aesthetics, assembling these switches and those keycaps, and while the results can be beautiful they aren’t structurally all that different, still not quite something truly built to be truly personal. Kailh bronze switches are made of joy, sure, but if my wrists are still contorting to use the keyboard, that fantastic popcorn keyspring texture isn’t going to be durably great for me.

I’ve had this plan in mind for a while now, and have finally gotten around to setting up a keyboard the way I’ve long intended to thanks to a friend who introduced me to Cardellini ball clamps and mounting plates. Those were the missing pieces I needed to set up the keyboard I’m typing this on now, a Kinesis Ergo Edge split mechanical keyboard.
Some minor gripes about this specific device include:

But the nice things about it – the action on these delightfully clicky Cherry MX Blue switches,  the fact that most of the keys are in the right places, the split cable being elegantly tucked away – they outweigh all of the gripes, and so far I’m reasonably happy with the setup, but that’s not really because of what came in the box.
It’s because the setup is this: 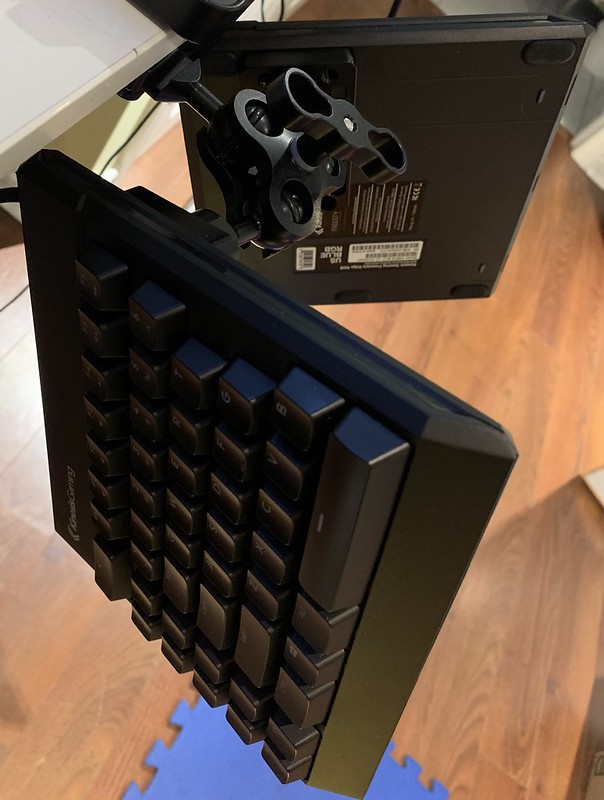 Like I say, I’ve had this in mind for a while – an A shape hanging off the front of the desk, each half of the keyboard with a ball head sticking out the plates on the bottom and a third ball head sticking out of the standing desk at about belt level, bolted into the underside of my standing desk. All of it is held together with a surprisingly rigid three-way ball clamp – the film industry doesn’t like having lights or cameras just topple to the floor for no reason, funny story – and the result is a standing desk where I can type with my hands in a very relaxed, natural position all day, without craning my wrists or resting them awkwardly on anything. The key surface is all facing away from me, which takes some getting used to, but hooking my thumbs on the side of the spacebars gives me a good enough home key experience that my typing error rate is getting back down to the usual “merely poor” levels I’m long accustomed to.

It’s a good feeling so far, even if I’m making microadjustments all the time and sort of reteaching myself how to type. I’m starting to suspect that any computer-related ergonomics setup that preassumes a desk and chair is starting from a unrecoverable condition of sin; humans are shaped like neither of those things, and tools should be made to fit humans.

Update: A few people have asked me for a parts list. It is: